You are here: Home / Archives for Recipes / Casseroles I’ve been tweaking, experimenting, tweaking, planning, and re-tweaking favorite and new recipes for the upcoming holidays.  In our family, real joy is found around the dining room table (holidays, special days, any days….), so I put the utmost thought and planning into the food we’ll be gathered around.

Like most families, we have our traditional favorites that make their appearance on their perspective holidays, but I also love to try new dishes and desserts to keep my adored ones on their adorable toes. I’ve been experimenting with corn pudding the past few months because everyone loves corn and, let’s face it, it’s a must-have for Thanksgiving.

Before I had to give up wheat and gluten, my go to corn pudding called for a box of Jiffy Cornbread Mix (recipe). I’ve been trying since to come up with a recipe to rival that delicious recipe. The one below is as delicious, it’s just different, you know?

I’ll post future corn pudding recipes as well as other side-dish, bread (gluten-free, of course) and desserts here on the food blog in the coming weeks.

After all, Thanksgiving and Christmas will be here before we know it! 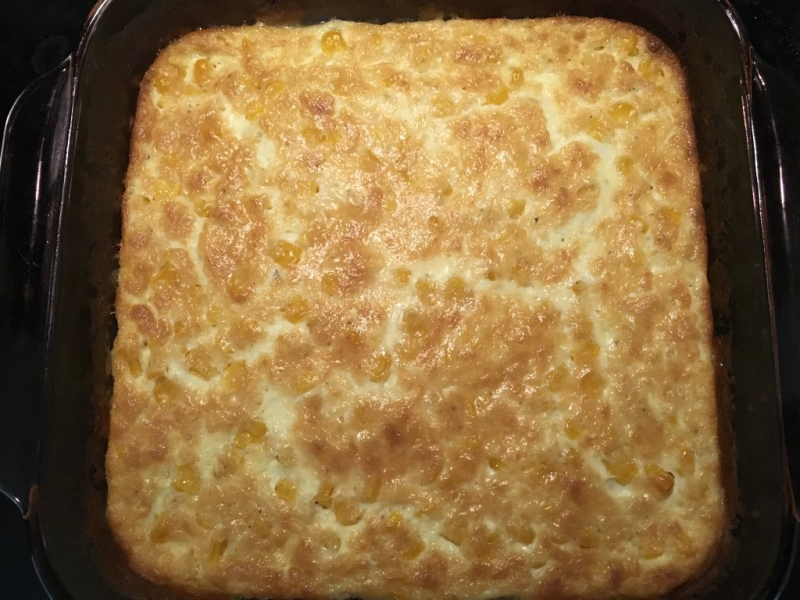 The corn pudding recipe below was published before I had to give up gluten and wheat, so it is NOT gluten-free.  However, it’s so amazingly good and so wonderfully simple that I can’t bring myself to remove it from the food blog. If you’re looking for an extra vegetable dish to serve on Thanksgiving, Christmas Eve or Christmas, this one’s a can’t miss. It’s honestly just delicious.

I’m working hard on coming up with a gluten-free version but can’t (yet!) replicate what Jiffy Cornbread Mix brings to the table. Literally.

It seems like most budget-friendly recipes and meals involve ground beef, don’t they? I love when chicken recipes play by the penny-pinching rules. This casserole is also a quick and easy recipe, so basically there’s nothing you won’t love about this Chicken Broccoli Casserole!

Cook chicken thoroughly and discard all bones (be sure to get them all!). Cut chicken into bite-size pieces and place in a baking dish. Cook broccoli in salted water and drain well. Place broccoli on top of chicken.

Pour the creamy mixture over the chicken and broccoli. Cover with bread crumbs and bake for 25 minutes at 350 degrees.

shown above is from one of the most trust-worthy (and fast!) stores online – Cooking.com.  I don’t know about you, but I’m having mad visions of it sitting beautifully on my Thanksgiving table.

We always want our holiday table (whether it’s Thanksgiving, Christmas, or Easter) to have a huge impact.  We want the ooohs and we want the ahhhhs, even before anyone touches the food!  Personally, I’m in the market for new dishes for Thanksgiving and Christmas but can’t make up my mind.  I think I know the Christmas dishes I want but I’m not 100 percent sure I want to see a turkey looking at me from my dish, reminding me of something I’d rather not think about!

One thing I do know, this Pumpkin Covered Casserole Dish is a must-have.

Le Creuset Flame Petite Pumpkin Covered Casserole:  This flame colored 12-oz. Petite Pumpkin Casserole made from traditional stoneware is a must-have for every occasion, not just for the Fall holidays. Fill it with cinnamon sugar and display on the countertop or create individual pumpkin soups. It’s flexible, festive and fun!

I was recently sent a few boxes of Jovial Whole Grain Einkorn Pasta to review for Get Cooking and I’m most grateful for the opportunity.  Like a lot of people, I’m trying to feed my family healthier meals and that all begins (and ends) with making healthy, smart choices.

These little choices add up and pay off in a very big way.

If you eat as much pasta as we do in our home, you’re going to love Jovial Whole Grain Einkorn Pasta as much as we do. Finally, you can feed your family their favorite pasta dishes without the guilt.

Wheat pasta served with tomatoes and tomato sauce and/or chopped vegetables makes an excellent, delicious, and healthy meal.  Of course, we just have to remember to go easy with the meat, bread, and cheeses.

Wheat pasta can be used in place of traditional pasta in your favorite recipes. My youngest daughter, Stephany, was my hardest sell on wheat pasta but with the right blend of garlic and herbs, even she’s on board. In fact, she thinks Jovial is the best wheat pasta we’ve tried.

Below is a favorite recipe for Spaghetti Casserole.  Substitute Jovial Whole Grain Pasta and make it even better!

Spray a casserole dish with cooking spray. No surprise, I use the Olive Oil variety. Layer spaghetti on the bottom of the dish. Cover spaghetti with sauce. Now sprinkle the cheeses on top of the sauce.

Serve with some great bread and a wholesome salad.

When scientists unearthed the body of Ötzi, the Bronze Age man found perfectly preserved in a glacier in the Italian Alps in 1991, they discovered he had eaten an ancient species of wheat called einkorn for his last meal. A group of Italian researchers became curious about the grain and started what would be more than a decade of discovery. Their findings so intrigued the founders of Jovial™ that they began to work closely together to bring the supply of seeds and grain back to life.

Jovial proudly presents First Ever™ Whole Grain Einkorn Pasta, made from the world’s most ancient wheat, first cultivated 12,000 years ago at the birth of agriculture. The resulting products are wholesome, nutritious and surprisingly delicious. Einkorn was lost in time when new varieties of wheat with much higher yields were created by natural and commercial hybridization. In developing the Jovial™ brand, the company’s founders decided it was time to go beyond organic and take a closer look to find the purest of plant varieties.

“Jovial had its official start in 2010, but was idealized for many years,” said Carla Bartolucci, co-founder of Jovial. “It is our dream to change the future of agriculture by creating consumer demand for the purest, most ancient varieties of food. Our sustainable economic model focuses on farming first and then considers the entire process all the way through to the shelf. We believe the purest food we are all seeking can only come from the purest seed.”

Ancient grains are inherently more nutritious than modern varieties. Einkorn is the most ancient wheat. It is more nutritious on many levels than modern organic wheat, and even outperforms other “superfoods” including the blueberry in its nutritional value.  Although Einkorn is a healthy source of dietary fiber, it does not have a grainy or gritty texture. Packed with protein, B vitamins and minerals, a meal with Einkorn pasta is very sustaining.

Jovial Einkorn Pasta is masterly crafted in Italy by expert pasta artisans, who work to enhance the inherent goodness of this most ancient wheat. Einkorn’s starch is so different from modern durum wheat, it does not crush during milling and does not absorb as much water during mixing, resulting in a superior finished pasta. Jovial uses traditional bronze dies to press pasta shapes, resulting in a coarse surface that better absorbs sauce. The pasta is slowly dried at low temperatures to maintain Einkorn’s exceptional flavor.

Einkorn is innately rustic, with a hardy root system that overpowers weeds, eliminating the need for herbicides. It grows well without fertilization, making it ideally suitable to small-scale, organic agriculture.  Jovial works with a growing network of organic farmers in rural areas of Italy and other parts of Europe to grow 100% certified organic einkorn.

The First Ever™ trademark on Jovial products is the company’s guarantee of the purest Einkorn product and the purity commitment extends from “Seed to Shelf.”  Jovial Einkorn Pasta is packaged in a carton made from 80% recycled cardboard and is 100% recyclable. The window is certified 100% compostable, made from FSC certified wood pulp.

Even the packaging is healthy!

“We believe that the future of our food is a thing of the past,” said Bartolucci. “We were so excited to discover that a food from ancient history was preserved in time and could still be grown today.”

I gotta tell you, I absolutely, positively cannot get enough of asparagus.   It ranks right up there with chocolate, coffee, green tea, and avocados for things I want – in the worst possible way – daily.  Here’s a recipe I know you’ll love.  My favorite way to serve asparagus is steamed with creamy, Heavenly Hollaindaise Sauce – but I’m trying to branch out and serve it differently from time to time.

Okay, I tried once.

Hung by the strands of my own honesty.  At any rate, here’s the recipe.

Preheat the oven to 300 degrees. Grease a 2-quart casserole dish.

Layer sliced potatoes in the bottom of your dish. Top with the onion, then asparagus. Sprinkle with salt and pepper.

Put pats of butter on top of the vegetables and sprinkle with water.

Cover and bake for 1 hour, until the potatoes are tender. Top with grated cheese and allow it to melt deliciously into the vegetables (as if you could stop it if you wanted to). Serve and enjoy!

Saute onion and green pepper in margarine until the onion is tender – about 8 minutes.

Mix both cans of corn (remember to drain the whole kernel corn), flour, and eggs in a medium bowl. Stir in the onion mixture, evaporated milk, salt and pepper. Pour into ungreased 1-1/2 quart casserole dish. Sprinkle with nutmeg.

Bake at 325 degrees for 75-80 minutes or until center is set. Let stand 5 minutes before serving. Yield: 8 Servings

Cook broccoli according to the directions on the package. In microwave, melt margarine and cheese together. Mix with broccoli. Pour into a greased casserole dish.

Mix together TOPPING ingredients and pour over broccoli mixture. Cook at 350 degrees for 20-25 minutes.

Could it possibly get any easier than that?!

One of my favorite human beings, let alone Presidents was President Ronald Reagan.  He was one of a kind and I’m not sure there’ll ever be another like him.  The country fell in love with him and for good reason.  His charm, personality, and sense of humor made him a force to be reckoned with and they made him always appear to be larger than life.

The recipe below is reportedly a favorite of this great American and would be perfect for a President’s Day supper – or any day for that matter… it sounds delicious!

by H. Haller and V. Aronson