You are here: Home / Reviews / Cookbook Reviews / Top 10 Reasons Printed Cookbooks Will NEVER Become Extinct
I may earn money or products from the companies mentioned in this post. This costs you absolutely no extra money (of course), it simply allows me to maintain the lifestyle my cats are accustomed to! There, you have now read the biggest understatement of the century. As I’ve often said on the food blog, I collect cookbooks and have since I was 16 years old.

Never you mind how long ago that was.

As you’d expect, given this lifelong passion, I write a lot of cookbook reviews on the Buttermilk Press food blog, “Get Cooking.” I only write about cookbooks I’m certain you’ll love as much as I do. While I buy a lot (A LOT) of cookbooks, being a food blogger has also given me a glorious perk – many cookbooks now come to me!  Unwrapping a new cookbook in the mail, for me, is like a kid unwrapping a present on Christmas morning.

I was recently looking through one of my new cookbooks and something occurred to me: Cookbooks aren’t going anywhere.  People stand on both sides of the eBook vs printed book debate. While I’m un-apologetic-ally old fashioned, I do have a great number of Agatha Christie books on my iPad. I prefer books I can hold, but having a Hercule Poirot mystery at my side every minute of the day carries some weight with me.

Cookbooks, however, are quite different and I’ll tell you why.  Cookbooks will never go out of print or out of style and they’ll never make anything but the most excellent gift idea for cooks and foodies.

Physical cookbooks are here to stay and, in my opinion, they enrich the life of any cook and even make them a better cook. I’m sure you’ve heard the same logic I have, “You can find so many recipes online, why buy a cookbook?” As you’ve probably guessed, I have a few great reasons.

The wonderful thing about cookbooks is, I know they will be.

Cookbooks aren’t going anywhere and I think that calls for a piece of chocolate candy…. made from a recipe in a cookbook you’ll soon see reviewed on Get Cooking: Sally’s Candy Addiction! 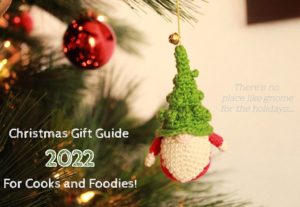