You are here: Home / Archives for Recipes / Honey Recipes 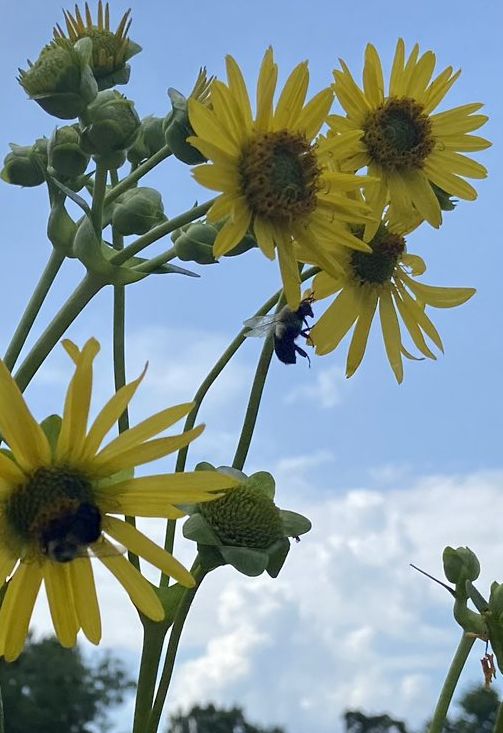 Whenever I tell people I grow flowers primarily for the visitors they attract, “… hummingbirds, songbirds, butterflies, bees..,” they inevitably say, “Bees?! You WANT to attract bees?”

Absolutely! I love them with a passion. Not only do they serve a great purpose in life as we know it, they’re responsible for one of my favorite culinary loves in the world – honey!

I have been a honey fanatic since a very early age. Most kids would put syrup or jelly on their peanut butter sandwiches, but my favorite thing was honey. Honey and Peter Pan made a most excellent couple.

As an adult, I’ve found that cooking with honey makes just about everything tastes better. But here’s the thing… there’s almost always a thing, isn’t there??… not all honey is created equal. Some honey is so fantastic and out of this world that it makes other honey seem like sticky, slightly sweet thick water.

I have always, always known that, most of the time, you get what you pay for. The delightfully cheap honey in bear shaped plastic bottles will serve its purpose UNTIL you taste what honey is actually supposed to taste like. There’s truly no comparison and I was recently reminded of this. 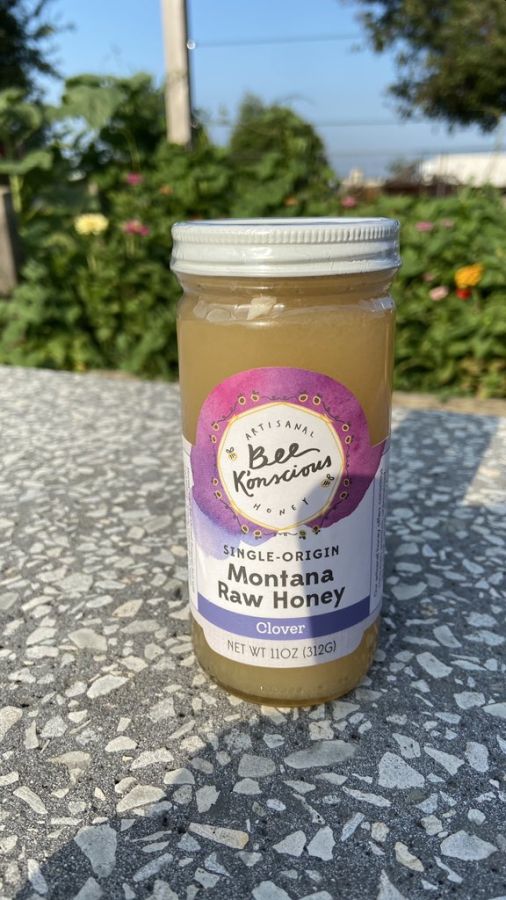 I am often sent food, drinks, tea, coffee, and similar products to review on my food blog as well as my tea review blog, Crazy Tea Chick. Very often, the products I’m sent are so good, I regularly buy them as a result. I was recently sent a jar of Bee K’onscious Montana Raw Honey and will darn sure make certain I never run out of it!

Now, keep in mind, I am a lifelong devoted and fiercely dedicated honey lover. I’ve bought them all it seems – so when I tell you that this is the best honey I’ve ever had, you can rest assured it is extraordinary honey.

Montana Clover.  Many consider clover honey to be the standard by which all other honeys are measured. The mild, sweet flavor like a sugary treat with hints of cinnamon and vanilla makes this a top favorite for honey lovers and not. The color ranges from white to light amber. The texture is thick and creamy with a very pleasant aroma.  For any delicious treat add this to some yogurt or fresh bread with ricotta cheese. How about pancakes topped with berries and then lathered on top with a spoon full of honey? There are many folks that simply spread this on toast and say it tastes like a cinnamon roll. 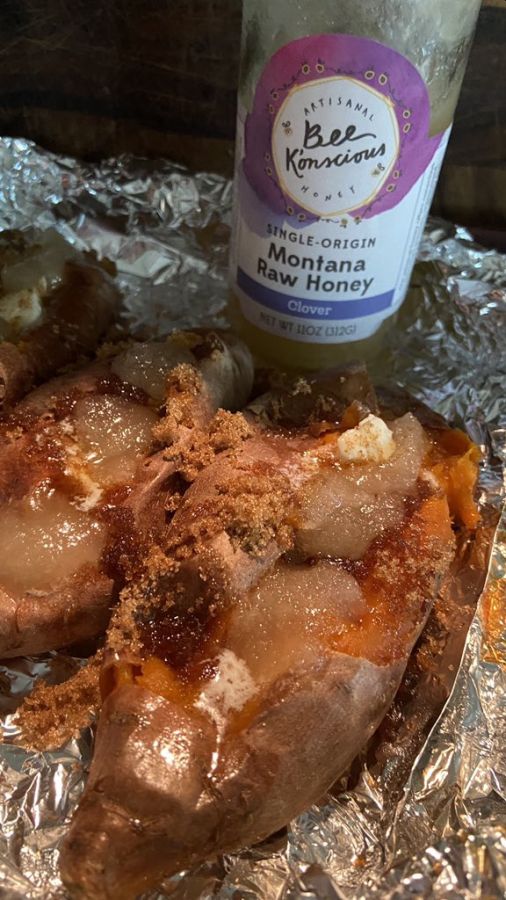 Honey has an impressive list of health benefits, but my favorite has to do with allergies. I suppose this is simply because I have the worst seasonal allergies in the world! I have noticed that, while I’ve been fiercely enjoying B’konscious honey, I have had to use my Benadryl (or as I call it, Liquid Zombie because it makes me feel like the walking dead!) far less often. Given that I use honey so often, something tells me that the benefits of honey are superior when the honey, itself, is superior.

Honey is also beneficial for great sleep as it promotes the release of serotonin.  The body converts serotonin to melatonin, which regulates quality and duration of sleep. Maybe that’s why I’ve been sleeping so soundly lately. I’ve been entering a deeper sleep because my dreams have been pretty darn entertaining. Seriously, nothing out of Hollywood could even hope to compare.

Other Health Benefits of Honey From B’konscious Honey’s Website:

You can buy this exceptional honey directly from the B’konscious Honey website. You’ll find all of their gorgeous products, recipes, health benefits, and more.

I eat honey as often as any self-respecting bear.. more often than the intermittent fasting bear crowd.

Judge me, if you must, but it will not slow me down!

The only drawback to my honey fanaticism is the sticky little containers – even those shaped like bears look (and feel) unsightly. I was actually on Amazon yesterday shopping for Orange Blossom Honey (have mercy!) and I saw the beauty pictured to the right.

Can you say TOTAL game-changer?!

The Glass Honey Dispenser promises me that it will not drip, it will keep my honey (even the extra-special kind I order from Amazon) fresh and fabulous – and that it will look gorgeous doing it.

This bee-utiful hive-shaped glass dispenser would make a wonderful gift idea for anyone who loves honey.

Fellow honey fanatics, look ahive! Sorry, I honestly couldn’t resist. The National Honey Board would like to invite you to enter the Cooking with My Honey Bear recipe contest.

You have no idea how fast I’ll be entering this contest – are you kidding me? Look at the prizes!!!

To enter, just visit http://www.honey.com and submit your original or favorite recipe that includes 100% pure honey by 11:59 pm on Sept. 15. If you’d like, you may also include a photo of you with your “Honey Bear” or other honey bottle and/or a photo of the completed recipe.  I can’t even tell you how much I love the little Honey Bear containers.  I buy, and love, them every single time!

Right around this time, I start whipping  out the pumpkin pie and sweet potato pie recipes.  My family loves both types of pies, so I can’t go wrong either way. There are so many different recipes for these Thanksgiving favorites and I always feel like I have to try them all.  After all, I want to have the best pies  I can when Thanksgiving rolls around.  My husband greatly prefers sweet potato pies and my middle daughter, Brittany, much prefers pumpkin pies.  The rest of us love them both to distraction.

That’s actually one of my top tips for Holiday baking:  Experiment!  Try out different recipes before the big day rolls around.  Never, never, never try a new recipe on a holiday.  Granted, more times than not (if you know what you’re doing, anyway) the recipe will turn out fantastic – but if you’re fairly new to cooking or if you frankly don’t do it that often, it’s better to be safe than sorry (and hungry!).

You’re going to love this Honey Pumpkin Pie Recipe – and just in time for Thanksgiving.  Be sure to make the Honey Whipped Cream to top it off.  Heavenly!

Both recipes are from the National Honey Board – I’ve got nothing but deep love for anyone who makes the world a sweeter place in which to live, love, and laugh.

In a medium bowl, beat eggs. Brush one teaspoon beaten egg on inside of pie crust. Place crust on a cookie sheet and bake for 5 minutes. Meanwhile, add the rest of the ingredients to remaining beaten eggs and whisk to combine. Remove pie crust from oven and carefully pour honey pumpkin mixture into hot crust; bake 5 minutes more at 425°F. Reduce heat to 350°F, and bake 30 to 40 minutes more, until filling is set. Cool completely and serve with Honey Whipped Cream (recipe follows).

I’ve noticed lately that a lot of Hispanic traditions and celebrations are going mainstream. Such is the case for Dia de los Muertos, or Day of the Dead. The National Honey Board has even recreated traditional Dia de los Muertos recipes made with honey, a customary ingredient that according to legend, gives a unique sweetness to the journey from life on earth to life after death.

Día de los Muertos, celebrated on November 1 and 2, is originally an Azteca custom honoring their dead during the ninth month of the Solar Calendar. Although the original festivities have changed through time, their essence is intact. And, even though the authentic human skulls have been replaced by candy imitations, these representations along with paintings, costumes and art forms symbolize death as the birth of a new life.

This year, Dia de los Muertos falls on a Sunday; a great opportunity to extend celebrations with family and friends at the end of the weekend and enjoy delicious dishes made with honey.

Add pumpkin pieces to stockpot and simmer for approximately one hour until sauce has reduced by almost half and has become a thick syrup. The pumpkin should be fork tender, but not falling apart. Allow to cool and serve.

Preparation:
Combine egg whites, honey and vanilla extract; mix well. Pour honey mixture over sugar. With your hands, thoroughly combine sugar and honey until you have a consistency similar to wet sand. (Mixture should form a ball when squeezed in your hand.)

Tightly pack the sugar mix into the skull molds and wipe off excess. Invert onto a flat surface and allow to dry for 24 hours.

Mix cinnamon and sugar, sprinkle over fried buñuelos. Drizzle honey over buñuelos to taste and serve.

Photo and Recipes courtesy the National Honey Board.

Below are some fantastic recipes from the National Honey Board that call for two of my all-time favorite flavors in the world:  Honey and Apples. Yum!   One of the reasons I think I love apples so much is they taste like Autumn to me.  Since it’s my favorite time of the year, I’m good with that.  As for honey, I know why I’m so in love with it – it’s a little thing we call a sweet tooth and my head is full of them.  When these two flavors team up, Joi is one happy, happy Kentuckian.

Drop tablespoonfuls of batter over hot apple mixture. Cover and simmer 15 to 20 minutes or until dumplings are cooked through and wooden pick inserted near dumpling center comes out clean.

Using electric mixer beat together honey, oil and coffee. Beat in eggs. Combine dry ingredients; gradually add to honey-egg mixture, mixing until well blended. Stir in apples, almonds and cranberries. Pour into lightly greased and floured Bundt or tube pan. Bake at 350°F for 35 to 40 minutes or until toothpick inserted in center comes out clean. Remove from oven; cool on wire rack. Dust with powdered sugar; garnish with sliced almonds, if desired.

*****  This is a little off-topic, but if you or anyone you love happens to get whatever it is going around (the coughing, sore throat, chest congestion, sneezing nightmare) – put honey in tea and drinketh a lot! The honey soothes the throat like nothing else can or will and the natural sweetness makes you feel as though you just may live.  If your throat is sore and inflamed, drink your honey-sweetened tea cold – it’ll put out the fire and make the inflamation go down.  If your throat isn’t sore, but you have a lot of chest congestion, drink your honey-tea warm.. it’ll open you up and you’ll re-discover a little something we call breathing.